I take a keen interest in all things ‘open’, be it “open source”, “open data” or “open government”.  I’ve been directly involved in the opening up of public data in the past and I am particularly keen on the potential of open data to create new services, or help drive the redesign of existing ones.

What is sometimes forgotten is that although some open data is created in the ‘open’, i.e. through open collaboration, most open data is derived from data whose primary purpose (the reason it was created) is internal to an organisation, i.e. it is internal data that has been publicly exposed, in whole or part, as raw or transformed.

This creates a significant problem for open data and its sustainable re-use as part of any service offering – the management of the data is centred on its internal use, not on its secondary use as open data.  At worse, this sees data being published once and not maintained thereafter – the ‘throw it over the wall’ form of data publishing.  At best, even if the open version is maintained, there is rarely any dialog or feedback loop between the publisher and open users of the data.

To be sustainable, the publishing of open data needs to become a dynamic process, where the open nature of the data is central to its management.  There needs to be a collaborative dialog with it’s users, who can contribute to the improvement of the data and its open publication, e.g. through the correction of errors and the hosting of third party services.

On this theme, I took myself off to a Meetup on Monday night, organised by FutureGov, to hear Ben Balter from GitHub talk about GitHub for Government.  GitHub is a platform (based on Git) for the collaborative development of software, including open source.  They are now working on broadening its application to open data; and more generally to open government.

As part of his presentation, Ben put up this slide showing the virtuous circle that a collaborative platform such as GitHub achieves for open source software development:

The idea is to reproduce this for open data and open government, as shown in a further slide from Ben: 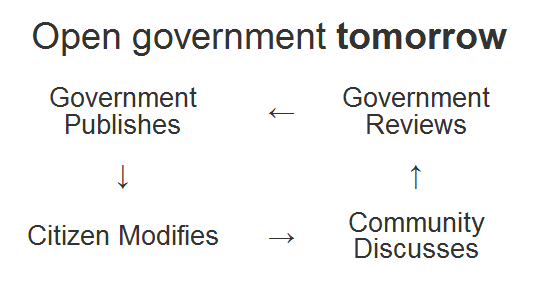 Now, open data is not the same as open code, but in principle I thought yes, this is where we need to be.  Git and platforms like GitHub, certainly have features that we need to reproduce for open data. Whether the answer is GitHub itself, I’m not so sure, but their involvement (and they have quite a bit of cash behind them) should help address this critical aspect of open data – left largely unaddressed up until now.